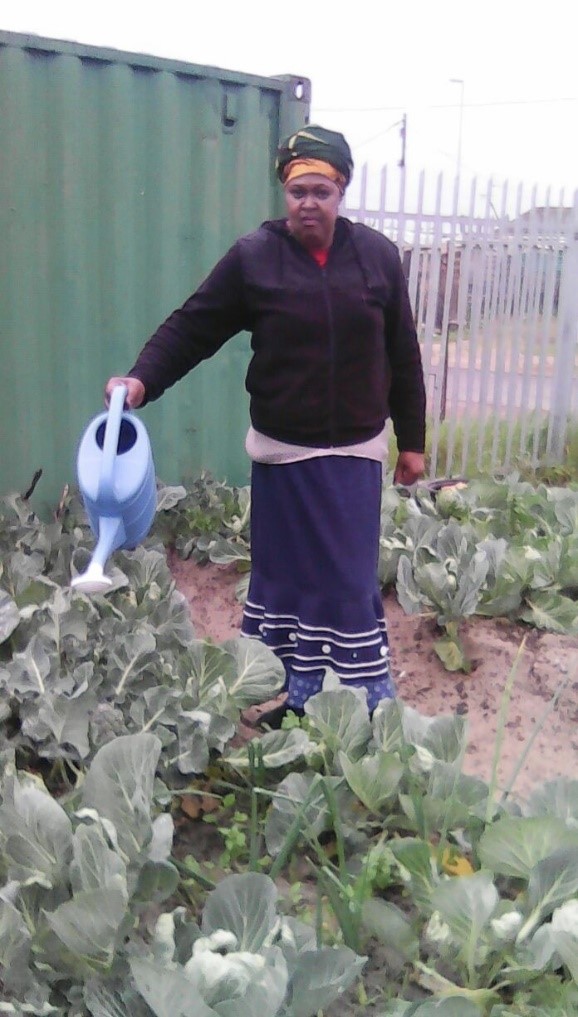 Gondwana Alive’s #GrowGreen Programme builds stewardship capacity through mentorship and training. We have partnered with South Africa’s Community Works Programme (CWP) to help this programme contribute not only towards job creation but also to the development and promotion of gardeners with eco-friendly skills, facilitation of urban conservation and climate change mitigation.

During a vertical gardening training course in Khayelitsha, we met a woman called Nomphumlani Nontsikelelo Magubudela, well-known as Mamgcina. She is a CWP group leader in Khayelitsha, a low-income suburb in the City of Cape Town. She grew up at Mount Fletcher in the Eastern Cape Province and came to Cape Town in the early 90s to find a job to provide for her family. She worked for over 10 years as a domestic worker in one of Cape Town suburbs. In 2013 her employers decided to move overseas leaving Mamgcina without job. She found difficult to find a job because of her age so she joined the CWP in order to put something on the table for her children.

She started as someone who did not know anything about gardening but she was willing to learn and forced into situation where she had little choice. Through CWP she developed knowledge and an interest in gardening. As a result, after few months with CWP she started her own garden at home. This garden helps her to earn extra cash for her family by selling the vegetables to neighbours and to feed her family, which really helps as the money she earns from CWP is not enough for her and her family.  After a while she became passionate about the garden and became one of the group leaders at CWP. As a CWP leader she is responsible for people that are working under her and for training them to get the job done. She is even happier to help other people that are not with CWP.

Please donate to Gondwana Alive so we can continue to support and grow wonderful community mentors and stewards like Mamgcina. Support one mentor and touch many lives #GrowGreen.