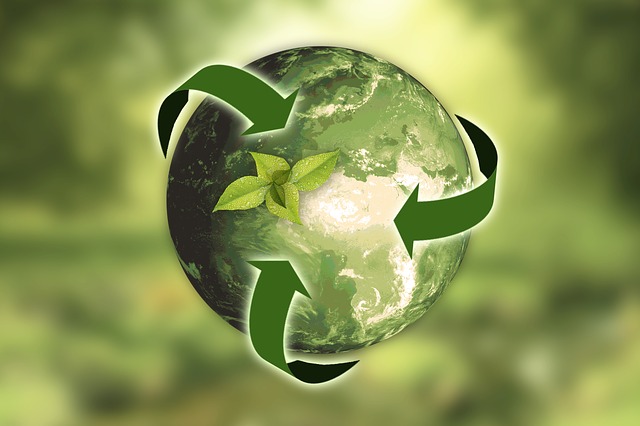 Our Earth and the diversity of life that inhabits it are in serious trouble. We are in the grip of a rapidly escalating global extinction. The fossil record shows there have already been five mass extinctions of life on Earth. These were due to mega-volcanos or asteroids, such as they one reputed to have wiped out the dinosaurs. Humans, with our exploding numbers and voracious needs, are the cause of the “Sixth Extinction” of life on Earth.

Why do we need to take care of Earth?

All 7 billion plus people need to become earth stewards and take care of our home, if for no other reason, other than we have nowhere else to go right now. By preserving the world’s natural and cultural heritage, we can learn from the past and build a brighter future that promotes the dignity of every human and every other species of life. 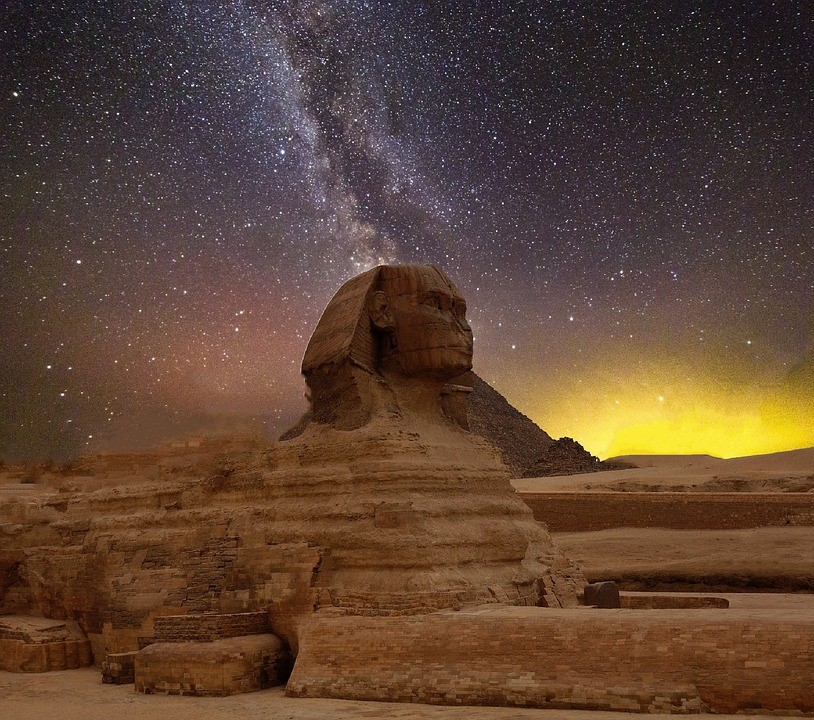 What are the Earth Alive Corridors?

Many different kinds of corridors have been described for different purposes. Over 10 years ago John Anderson and Maarten de Wit (now respectively an Ass. Prof. and Prof. at Nelson Mandela University) introduced the concept of connecting selected prime heritage sites into Corridors. The Earth Alive Corridors are winding belts of territory over 1,000km long that each tell a chapter in the 4,6 billion year history of our world better than anywhere else. This concept has been widely endorsed by the scientific community at Gondwana Symposia. 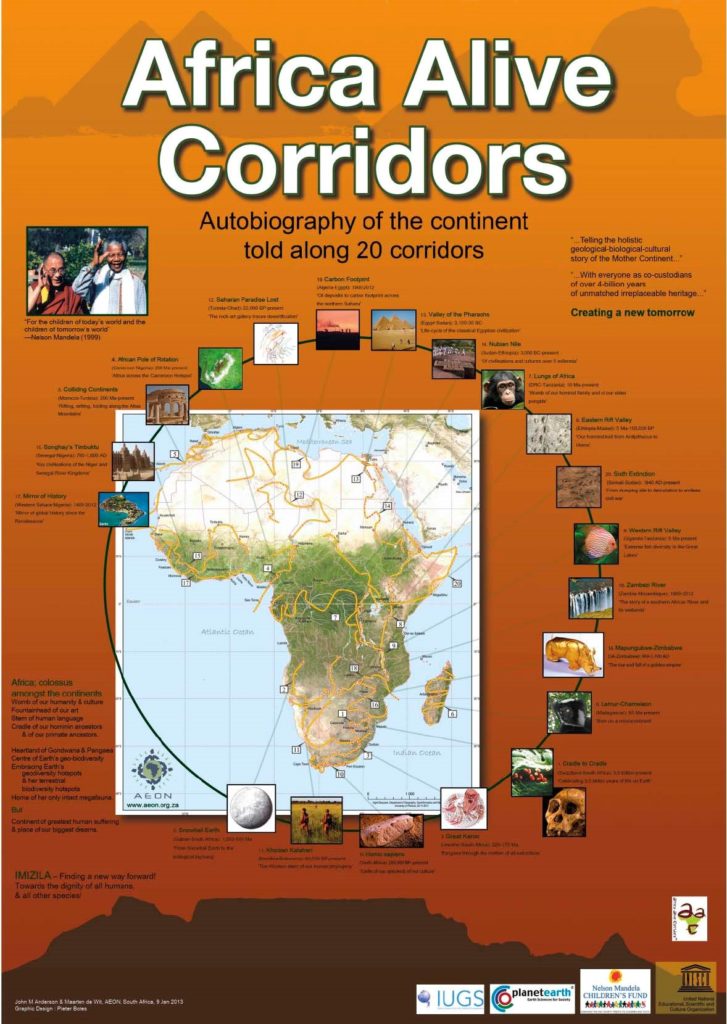 Under the auspices of AEON (Africa Earth Observatory Network) John and Maarten began the world’s epic story in Africa – the mother continent. Africa’s autobiography is told by 20 Africa Alive Corridors (AAC) that take in all its countries. Africa’s story covers the major steps along Earth’s trail from the earliest bacteria to human civilization to the impact of one species on 50 million other species precariously sharing the planet with us. And the one species who can choose to influence where this epic story is headed.

The AAC project was launched in May 2008, in Arusha, Tanzania, at the African launch of UNESCO’s ‘International Year of Planet Earth’ and was selected as one of two Africa legacy projects. John and Maarten took the opportunity to encourage all 900 million Africans of all backgrounds and persuasions to join in the stewardship of Africa’s uniquely rich heritage.

“In doing so they will promote the ideal of the project to respect the dignity of all life on Earth, all humans and every other species”.

Springer has agreed to publish a book on each of the Corridors. The first two volumes of this epic story include contributions from over 100 scientists and are due to be published in 2019.

For those who know how to read it, embedded in the earth is an epic tale. The Earth Alive Corridors project brings this tale to life. Much can be learned of the past from the African continent and it is here the tale begins – along 20 Africa Alive Corridors, each Corridor being a chapter in the tale.

It is a tale of a massive landmass that splits apart, the pieces that drift, turn and collide to form the continents as we know them today.

Colliding Continents Corridor (Morocco-Tunisia): The Atlas Mountains are a geological gallery of rifting, drifting & folding that is difficult to match elsewhere. They provide clear evidence of the initial disintegration (rifting) of one massive landmass (Pangaea); then of the separation (drifting) of the southern hemisphere continents we know today (Gondwana) from Laurasia; and finally, with the anticlockwise rotation of Africa, that entailed its collision with Europe (folding).

African Pole of Rotation Corridor (Cameroon-Nigeria): A linear chain of islands angling across the Gulf of Guinea to meet a graceful ark of volcanic peaks, illustrating the rotation of the continent.

Eastern Rift Valley Corridor (Ethiopia-Malawi): Dominating the topography of Africa is the spectacular Rift System more than 3,000 km long. Nowhere else globally do we see the splitting apart of a continent that highlights the action of plate tectonics so strikingly.

It tells of geological and biological co-evolution

Western Rift Valley (Uganda-Tanzania): Together, the Rift-Valley lakes form an archipelago of explosive speciation. Perhaps as many as 1,000 species of fish in the surface waters of Lake Malawi.

Cradle to Cradle Corridor (Swaziland-South Africa): Spans the journey of the oldest known bacteria in the ancient Barberton mountains to the world’s richest assemblage of hominid fossils in Maropeng.

Lungs of Africa (DRC-Tanzania): Science tells us that in the rainforests of Africa, a fork occurred in one of the branches of the primate phylogenetic tree: one lineage led to gorillas & the other, eventually, to the emergence of humans.

Homo sapiens (South Africa): With respect to superlatives & uniqueness, this Corridor is difficult to match. At a succession of some 20 sites along the spectacular southernmost coastline of Africa, is preserved, without peer, the archaeological story of our human (Homo sapiens sapiens) cultural evolution-from our first mutual ancestor, Mitochondrial Eve, at some 200,000 BP. Included are our earliest known link between tides and moon (162,000 BP), art & jewellery (75,000) use of bow & arrow (71,000BP) & lots more.

San Kalahari (Namibia-Botswana): It is now firmly established that of the numerous languages spoken globally, those ‘clicks’ of the Bushmen (San) have the deepest roots. Likewise, amongst the great diversity of modes of spirituality & religion, theirs will have the deepest roots in the long history of humanity. The legacy of the San people merits, then, the highest possible respect.

Valley of the Pharoahs (Egypt-Sudan): Most fascinating & long-lived of the early Middle-East civilisations is the one that sprang up along the floodplains of the Nile Valley. Ironically, it owes much of its success & longevity to the insularity afforded it by the ‘catastrophic’ desertification of the Sahara—one community’s disaster is another’s opportunity.

Nubian Nile (Sudan-Ethiopia): The first 3000 years of the story of the Nubian Nile parallels & interdigitates with that of the Egyptian Nile. Here is an intriguing & perhaps little-known part of that linked story. In the succession of 31 pharaonic dynasties, the 25th, the Nubian, lasted from ca 770- 656 BC. For a span of three-quarters of a century, the so-called Black pharaohs, conquerors from Nubia, ruled over Egypt.

Songhay’s Timbuktu (Senegal-Nigeria): Timbuktu, an extant town of some 10,000 persons in central Mali, is a remote legendary place in the Western mind (as captured in the phrase, ‘from here to Timbuktu’). From AD 1340-1550, it was the capital—an imposing city on the banks of the Niger R—of the Kingdom of Songhay. It became one of the greatest centres of trade, religion and academia of the time; its renowned university the equal of any that existed concurrently in Renaissance Europe.

Mapungubwe-Zimbabwe (South Africa-Zimbabwe): Probably without parallel globally is the degree to which the territory between the Zambezi and Limpopo Valleys from 1100 to 1700 AD became a cultural vortex. As the Bantu civilisations evolved through 600 years they were touched by the more ancient spirituality of the Bushmen to the west, & by the wholly different worldviews of the traders from the E, (Europe, M East, Far E).

Mirror of History (Western Sahara-Nigeria): ‘Mirror of global history since the Renaissance’. The western bulge of Africa reflects the history of Western Civilisation from 1400-2010. It is a story of irony you could barely conceive. It begins in the 1430s with the founding, by Henry the Navigator (1394-1460), of the world’s 1st naval academy at Cape St Vincent on the SW tip of Portugal. From this peripheral corner of Europe, began the colonisation of Africa & the globe by Renaissance Europe.

The tale tells of mass extinctions along the way, of global warming and climate change and the Sixth Extinction underway

Great Karoo (Lesotho-South Africa):The incredible array of fossils embedded in the rock strata of the Karoo provide evidence of a mass extinction event along the way.

Saharan Paradise Lost (Tunisia-Chad): Along the peaks of the Sahara is another of the great African rock-art galleries that portray parts of human history. This Saharan gallery tells an especially pertinent story at a time when we have (belatedly) awakened to the uncertainties of global warming. A 12,000-year span of rock paintings & petroglyphs depicting different animals during this time, mirror the drying out of the Sahara from verdant paradise to the world’s most extensive desert.

Carbon Footprint  ‘Oil deposits to carbon footprint across northern Sahara’: Oil could be seen as one of the principle arsonists behind the 6th Extinction & global warming spinning out of control. Across the northern belt of Africa, from Algeria to Egypt, is emerging a new front in the relentless spread of our carbon footprint. Large petroleum reserves occur in Ordovician to Tertiary reservoirs spread through the region. This corridor takes us directly into the realm of global warming, into the whole question of managing our planetary home holistically—before it is too late.

Sixth Extinction (Somali-Sudan): 1940 AD-present ‘From dumping site to denudation to endless civil war and extreme shifts in climate with disastrous consequences’. On Boxing Day, 26 December 2004, a magnitude 9 earthquake struck off the NW coast of Sumatra. This unleashed the tsunami that was on everyone’s lips. The leading wave of the tsunami sped W across the Indian Ocean at 500mph. After 7.5h & a journey of 3000 miles (4828 km) it struck the coast of Somali (with waves now down to 4ft). Around 290,000 people were killed outright, some 300 of them in Somali.

It reminds us to look after the extraordinary natural and cultural heritage depicted in this tale – lest we forget who we are, where we came from and what we learned along the way.

Zambezi River (Zambia-Mozambique): The story of a southern African River and its wetlands’. At the plumb-centre of Africa S of the equator lies what is set to become the world’s largest conservation area – the ‘Kavango-Zambezi Trans-frontier Conservation’ area. This is a Peace Parks initiative & it was set in motion in December 2006, when the Ministers of the Environment of five countries— Angola, Botswana, Namibia, Zambia & Zimbabwe—signed a memorandum of agreement.

The second publication focuses on the Homo sapien Corridor (HSC) which tells the story of the evolution of modern man better than anywhere else in the world.

“The story is holistic viewing the continent from the geological, natural and cultural perspectives….in the context of this volume, the corridors play a definitive part allowing us to demonstrate clearly the reality of the interdependence between all the pieces of the puzzle.”

Why does Gondwana Alive support the Corridors project?

John and Maarten helped found Gondwana Alive in order to help “Stem the Sixth Extinction” and Maarten went on to found AEON which focuses on Earth Stewardship Science. Science informs our stewardship activities and we support their Corridors project because it goes back billions of years and demonstrates through scientific evidence the inter-relatedness between geological, natural and cultural heritage. This epic story is a powerful reminder that we don’t live in a world of isolated silos that is easy to control, we live in an inter-connected world, and the only thing we can control is what we do in each moment and how we do it. Because all things are inter-related we need to make conscious, respectful decisions in each moment if we are to stem the “Sixth Extinction” and heal our home.

Gondwana Alive supports Earth Alive with promotion and contributions to publications, including a contribution on invasive species and a short story told in the first-person.

We also support community stewardship projects in biodiversity hotspots along these prime heritage Corridors. For example: