Gardening for Life – a young father’s work and dreams 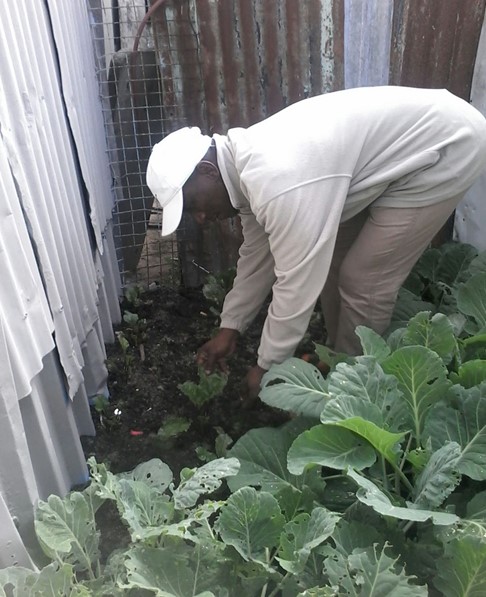 Sivuyile is a young father of two, living in an informal settlement in Khayelitsha in the City Cape Town, South Africa. He lives with his wife and his two children. He moved with his family from the Eastern Cape to Cape Town in 1998. His reason for moving was to find work but he has really struggled which is difficult because his wife can’t find work either.

In 2000 he got a part-time job on the Community Works Programme (CWP – a Public Works Project) as a gardener in one of the community gardens in Khayelitsha. This work has made it possible for him to put food on the table for him and his family. His dream is to earn enough to put his children through school. There were also other benefits – he has learned how to garden and has managed to get the odd job working as a gardener when he is not busy at CWP. These skills and income help enormously to make his dream come true. It also helps the community, the garden is on the grounds of the Methodist Church – where every Wednesdays the church has a soup kitchen for the community. It also makes the grounds more pretty.  Sivuyile did so well with CWP that they made him a supervisor. In 2017 Gondwana Alive partnered with CWP to help build the capacity of their workers. With what Sivuyile has learned from Noloyiso Gwangqa (aka Noli) and Mandlakazi Mgwebi  (aka Mandla) from Gondwana Alive, he is able to teach the young workers to do their job and encourage them to grow their own food.

“Noli’s training has helped us to learn more about gardening, especially in small spaces as we live in shacks which there is not much space. You can even make a vertical garden on a wall or a pole which takes little space. I was able to make a small garden on the small space that was between my shack and my neighbour. My neighbour was so interested and I helped him to make his own. I’m hoping this could encourage others, my community will get a bit greener and more pleasant. Even where I work my work after this vertical garden training has improved and my boss is impressed about this. I hope this can bring more work for me and more money to prove my family but I believe if I can build my profile on GA’s database (Mandla’s territory) I think that will help me more to get more jobs and reach my dream.”