SAFCEI in the news # Anti Nuclear

Who is SAFCEI and why are they making viral videos about nuclear energy being bad for the state of South Africa’s nation? 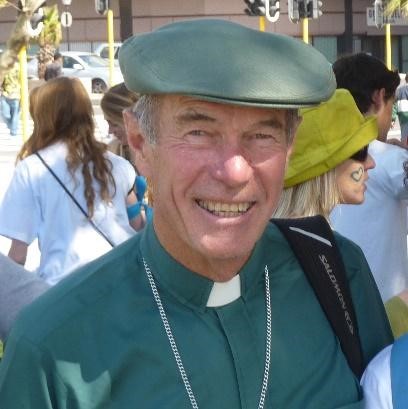 I recently heard about an amazing humanitarian, Bishop Geoff Davies, founder of the South African Faith Communities’ Environmental Institute (SAFCEI). His passionate devotion to the environment led him to bring a number of religions together under one umbrella as a multi-faith environmental NGO.  Check it out here http://safcei.org/.  Fascinated by Bishop Geoff’s story, I did a background check before tracking down this green stalwart for an interview.

Born in 1941 and educated at the Universities of Cape Town and Cambridge, he studied for ordination at Ripon College Cuddesdon before beginning his ecclesiastical career with a Curacy at St Mary The Boltons, West Brompton. The rest of his ministry was to be spent in Africa, firstly as Priest in Charge of Serowe, at the time the largest village in Botswana and latterly South Africa. Here he rose steadily in the Church hierarchy being successively Rector of Kalk Bay, Director of Mission within the Church of the Province of Southern Africa, Suffragan Bishop of St John’s and finally a Diocesan Bishop. After retiring from the Diocese in 2003; he initiated SAFCEI with a vision ‘’Faith communities committed to cherish living Earth’’.

Through his hard work he  received an Archbishop Langton awards from Justice Welby of Canterbury for civil rights  and the; South African Breweries award which was in recognition of founding SAFCEI and motivating faith communities.

Conscious about the “Sixth Extinction”

What really interested me was finding out what motivated and inspired him to champion environmental issues and this is what he said.

‘’ The aim was to establish an eco- congregation to get local churches to take on the environmental justice issues. In doing that we became conscious of the fact that climate change could be a major cause of extinction.

The environment is everything around us, it is part of us. The horror is that we as humans are the cause of extinction; what is sad is that we can’t bring back what is gone’’.

What could be behind this?

Bishop Geoff thinks that “it is the inequality in the world, money is the primary source of both environmental and social injustice’’.

Read more about the causes of extinction in Dr John Anderson’s Biodiversity & Extinction series of publications.

What could the solution be?

I asked the Bishop to tell us what the solution could be and this was his response:

‘’God has given us the answer – namely using our natural resources including the sun, water and wind’’.

It is no wonder then that SAFCEI has been vocal about the proposed Nuclear deal in South Africa.

We support SAFCEI in their bid to promote sustainable and renewable forms of energy using sun, water and wind. The burning of fossil fuels is a major cause of a climate that is changing too rapidly for most species to adapt to, and nuclear energy and waste carries risk.

At a recent breakfast hosted by SAFCEI we heard that the technology for harnessing energy from sun, water and wind has developed so fast in the past few years that South Africa’s energy policy and plans need to be renewed. Moreover, Germany has shown that green energy is a viable way to meet a country’s energy needs.

We call on experts in this field to please develop a constructive plan that shows how we can meet our current and future energy needs through renewable sources, and how we can convert from fossil fuels to renewable sources without causing an economic meltdown. Germany has done it – why can’t we?

What is my take?

Well, I believe that the masses of people living in townships like Khayelitsha where I live, are ill prepared to make an informed choice about whether or not to support the development of nuclear reactors in South Africa, and ask that more information about the different types of energy and their pros and cons are shared with us so that we can make informed decisions.